Who do you see in this image? 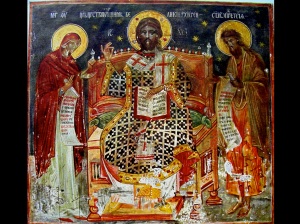 This one may be easier:

Both of these images show Jesus (center), Mary the mother of Jesus (left), and John the Baptizer (right).

Orthodox churches have an iconostasis: a wall of icons and religious paintings that links together the nave from the sanctuary in a church. The door (called the Beautiful Gates) that the priest uses to move between the sanctuary and the nave is flanked by icons. 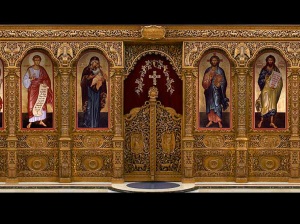 The bottom tier of icons is called the Sovereign. On the right side of the Beautiful Gates is an icon of Christ (often called Pantocrator –which means Almighty, Omnipotent, Lord of the Hosts). This image of Jesus symbolizes his Second Coming. On the left side is an icon of Mary the mother of Jesus, symbolizing Christ’s incarnation and entrance into this world. There is a theology behind these images. One side is Christ’s first incarnation, the other side is Christ’s second coming. All movement that takes place in the sanctuary during worship happens between Christ’s first and second coming.

John the Baptizer and Mary the mother of Jesus take their places beside Jesus as the primary examples of proclaiming and bearing the presence of Christ in the world. How do John and Mary strengthen our faith? One said, “I am not worthy to untie his sandals.” The other said, “I am the servant of the Lord, use me.” They model for us humility and service to the Messiah.

Advent is the season when we reflect on living between the first incarnation of Christ and his second coming. We remember his first coming into the world as a baby. And as we prepare for the coming of the infant Jesus, we are actually preparing for his second coming as the Ruler for all eternity.