I was reminded of the story of Cain and Abel today.

3In the course of time Cain brought to the LORD an offering of the fruit of the ground, 4and Abel for his part brought of the firstlings of his flock, their fat portions. And the LORD had regard for Abel and his offering, 5but for Cain and his offering he had no regard. So Cain was very angry, and his countenance fell. (Genesis 4:3-5) 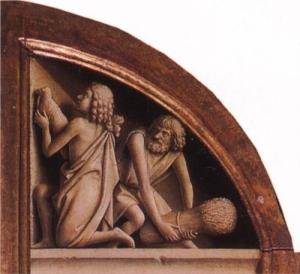 The text suggests that Abel’s offering was accepted because of the sacrifice that accompanied it. The firstlings were the oldest, most developed, most favored of the flock. They were most costly. Cain’s offering appears to have been nothing special, just a portion of the crops he cultivated.

Cain believed in power and wanted to manipulate God to be on his side and offer him favor. Cain’s true motives come to the surface after he murders his brother. We see the kind of power Cain is driven by.

How does our worship become the pure offering that Abel offered? By being full of care in what we offer to God. The church should take care, too, in setting the table for worship that unleashes the good and humble offering of all gathered. Perhaps asking what I want out of worship is more akin to Cain than Abel.

A #sermonquote for this Sunday #3EasterC when Peter comes face to face with the One he denied knowing.
A #sermon for #2EasterC - April 24, 2022. John 20:19-31 #DoubtingThomas
42nd birthday chronicles…
A #sermonquote for this Sunday #2EasterC when Thomas doubts not the resurrection, but the possibility of a crucified and risen Savior. #DoubtingThomas
A #sermon for #EasterSundayC - April 17, 2022. Luke 24:1-12. #EasterSermon #EasterMessage
Together Through Life is the 33rd studio album by singer-songwriter Bob Dylan, released on April 28, 2009, by Columbia Records. The release of the album, which reached number 1 in multiple countries, was unexpected and surprised fans. Mike Campbell (guitarist of Tom Petty) and David Hidalgo (of Los Lobos) appear in the ensemble. It includes the song “If You Ever Go to Houston” which seems appropriate to listen to here in the suburbs.