Thank you to everyone who attended the TUNE UP gathering on Saturday, August 5, 2017. Thank you to the volunteers and Messiah Lutheran Church for hosting us. Thank you to Larry Bose for capturing our day together with photos. This was our fifth year of TUNE UP and we are so blessed that you came and learned with us.

We had over 70 participants from 19 different churches all around the Houston area join us for this day of training and networking. The gathering began with opening worship and presentations from Brian Hehn, Clayton Faulkner, and Richard Birk. They covered the subject of diversity in church music with each presenting on genre, selecting songs pastorally, and why we should incorporate hymns into band-led worship. Then everyone divided into instrumental/vocal/tech tracks, and conceptual tracks. The instrumental tracks were divided by specific area (worship leader, acoustic/electric guitar, bass guitar, keyboard, drums, vocals, and sound tech). Conceptual track offerings included sessions on improving your worship band, running an effective rehearsal, increasing congregational singing, and using video technology. During the “Coaching for Bands” session a volunteer church band from Autumn Creek Baptist Church in Houston received feedback and help with their music from a panel of track leaders.

We want you to know about these helpful resources from some of our track leaders:

This week I am at the Rostered Ministers Gathering in Atlanta. I am helping with the audio/video logistics as well as sharing a couple of workshops. It has been a great week. Here are some pics: 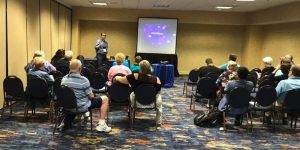 This was the “10 Ways to Use Video Technology in Worship” workshop.

We had some great discussion in the “Curating Worship for a Cross-Cultural Context” workshop.

This was my spot in the booth for the week. I used two MacBook laptops to display all the video content during worship, plenary, Bible Study, etc.

A really wonderful ballroom space with a huge piece of art as the backdrop. 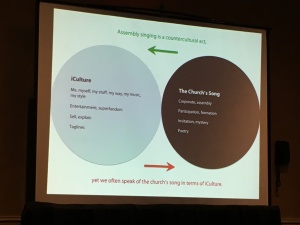 This was a slide from Chad Fothergill’s presentation on “Singing the Church’s Song in iCulture.” 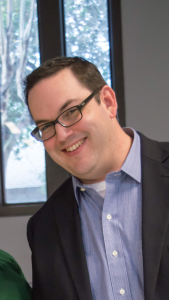 Summer is here! Hopefully you are enjoying a slower pace and taking time to relax. It really is essential, I have found, to find seasons when you can deviate from the daily grind. Maybe you are able to take a nice vacation. For others it may mean an entirely different schedule than the school year that allows you to enjoy different things. My family will be headed to Galveston a couple of times to see friends, go to the beach, and maybe a little fishing.

Here is my vacation tip (one that I need to practice as well). If you are truly trying to have a vacation, leave the work behind, all of it. That may mean leaving a laptop at home, disconnecting your email app, or turning your phone off completely. The first day is weird. It feels like you left the oven on or forgot to close the garage. Once you get over that nagging feeling, it is freeing to feel undivided. You can fully be where you are and present to whom you’re with.

For me, and perhaps for you too, this is all about control. I like to live under the illusion that I’m in control of things. I am on top of what is happening and I know what needs to be done. I sense that things are going well when I’m in control. Staying connected to my work and people who might need me gives me control. And a vacation might be the most opportune time to let go of control and join God in a Sabbath.

Summer has become a busy time for me over the last several years – go figure. This summer is no different. In July I am headed to Toronto for a week to attend the annual conference of The Hymn Society. I’ll be presenting a workshop called, “Engaging Worship and Culture: (Re)Discovering the Nairobi Statement” and talking about the work I participated in creating a resource for the ELCA. In August I will host our fifth annual Tune Up Worship Band Gathering. This year it is being held at Messiah Lutheran Church in Cypress. Tune Up is a worthwhile event where church musicians from all over the area gather for training. The week after that I will be in Atlanta for the ELCA’s first Rostered Ministers Gathering. I will be presenting two workshops: “10 Ways to Use Video Technology in Worship” and “Curating Worship for a Cross-Cultural Context.” I will also be coordinating video technology for the event.

In September I will be headed to Dubuque, Iowa for my first weeklong intensive at Wartburg Theological Seminary. I am beginning my journey toward rostered Word and Sacrament ministry in the ELCA. I am very happy about these next steps in my calling to serve the church. Fortunately the Collaborative Learning program through Wartburg will allow me to stay at Faith Lutheran and complete my degree and internship without having to leave. I am currently enrolled in a Biblical Greek course over the summer! I am eager to learn and looking forward to more school!

What would you say is the primary symbol of Christian worship?

Have you ever thought about this question? Let me suggest another way to think about this question. If you walk into a room of people engaged in Christian worship, what is the symbol in the room that gives it away? I believe most people would agree that a cross or crucifix would be the main symbol that is a dead giveaway that a room is used for Christian worship. However, that is not always the case.

Last month I traveled to Rochester, MN for a continuing education event. We gathered at Zumbro Lutheran Church to learn more about our Evangelical Lutheran Worship (ELW) hymnal on the 10th anniversary of its publication. I was struck by the space for worship at Zumbro Lutheran. What stands out to you in their space? 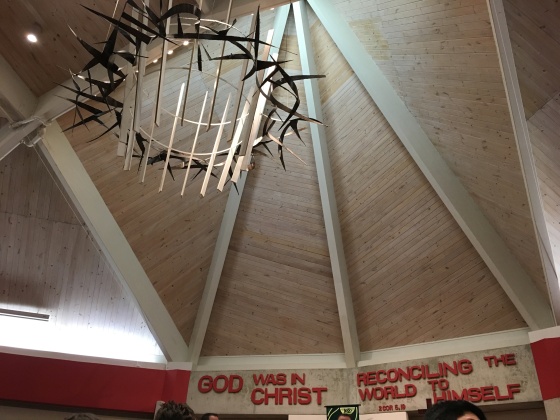 The first thing that stood out to me was the bold, red letters quoting a passage form 2 Corinthians. This text hovers on the back wall of the chancel, just above the table, and constantly reminds those gathered of God’s mission in Christ.

Next I noticed the object suspended in the air. What does this object represent to you? I can see several things. I could interpret this object as a crown of thorns, a circle of connecting crosses, or the wings of doves. Perhaps you see something different. Then I realized it. There was no cross in this room. At least there was no central, direct, grab-your-attention cross to tell you that this room was used for Christian worship.

Back to my question: what is the symbol in the room that gives Christian worship away? Actually, sorry, that was a trick question. It is a trick question because you may not consider the answer to be a symbol. The answer is people. The assembly gathered is the primary symbol in Christian worship. “Church” first and foremost is a people, not a building. The place in which we gather, the things we do – none of these would occur if not for the gathering of God’s people. 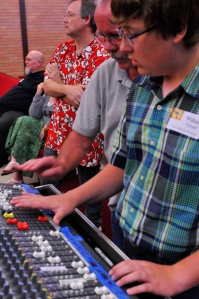 On Saturday, August 9, 2014, the TUNE UP worship band gathering was held. Over 100 worship musicians, sound techs, and video techs assembled on the campus of Faith Lutheran Church in Bellaire, TX (Houston) for a multi-denominational training event. Hosting over 100 participants for the second year in a row, the event was organized by the Worship Excellence Team of the TX-LA Gulf Coast Synod (ELCA) to improve the quality of band-led worship in smaller churches.

The assembled musicians and techs represented 20 congregations including Lutheran, Nazarene, Presbyterian, United Methodist, and Non-Denominational churches. Churches that participated were both from the Houston vicinity and rural parts of Texas.

One attendee commented, “Once again, my team and I have learned and grown through your gathering.” Another responded that the information they received in their track was, “Incredibly useful.”

After a second successful gathering, we will likely offer the event again in the future. Watch the event website for details: TuneUpGathering.org.

On Saturday, August 10, 2013, the first TUNE UP worship band gathering was held. Over 125 contemporary worship musicians and sound techs assembled on the campus of Faith Lutheran Church in Bellaire, TX (Houston) for a day of learning, growing, and networking. The event was organized by the Worship Excellence Team of the TX-LA Gulf Coast Synod (ELCA) to provide training in the fundamentals of music and worship.

The group that gathered represented 28 congregations including Lutheran, Nazarene, Episcopal, and Non-Denominational churches. Churches from as far away as Austin, TX and Chalmette, LA brought musicians to attend the event.

The schedule included times of worship, instrumental/vocal tracks, and conceptual tracks. A team of track leaders with main speaker Bishop Mike Rinehart led worship. The instrumental tracks were divided by specific instrument (acoustic guitar, electric guitar, bass guitar, keyboard, drums, vocals, sound tech). Each group gathered together for training and instruction specific to that instrument. Conceptual track offerings included sessions on arranging songs for worship, choosing songs for worship, and principles for worship. Additionally, a “Coaching for Bands” track was offered in which two church bands received feedback and help with their music from a panel of track leaders.

One attendee commented, “It’s nice to attend an event where you get something you can actually use.” Another said, “Thanks for doing this. It helped to refocus me on being a lead worshipper instead of a lead guitarist.”

An overwhelming amount of positive responses suggest that we will likely offer the event again in the future. Watch the event website for details: TuneUpGathering.org.