I was reminded of the story of Cain and Abel today.

3In the course of time Cain brought to the LORD an offering of the fruit of the ground, 4and Abel for his part brought of the firstlings of his flock, their fat portions. And the LORD had regard for Abel and his offering, 5but for Cain and his offering he had no regard. So Cain was very angry, and his countenance fell. (Genesis 4:3-5)

The text suggests that Abel’s offering was accepted because of the sacrifice that accompanied it. The firstlings were the oldest, most developed, most favored of the flock. They were most costly. Cain’s offering appears to have been nothing special, just a portion of the crops he cultivated.

Cain believed in power and wanted to manipulate God to be on his side and offer him favor. Cain’s true motives come to the surface after he murders his brother. We see the kind of power Cain is driven by.

How does our worship become the pure offering that Abel offered? By being full of care in what we offer to God. The church should take care, too, in setting the table for worship that unleashes the good and humble offering of all gathered. Perhaps asking what I want out of worship is more akin to Cain than Abel.

Advent is that season of expectation and preparation that leads us into the incarnational reality of God tabernacle-ing among us. Or as Eugene Peterson put it, God “moved into the neighborhood” (John 1:14, The Message).

Advent is also the kick-off of the new liturgical year. Even though not every church follows the Christian calendar religiously, there is something about Advent in which even contemporary churches can find hope. The intentional pause and reflection is highly sought after in our breakneck society. Advent plays well in churches trying to craft fresh expressions of the faith. But how do you make waiting fresh?

Here are some of my favorite creative resources for the season of Advent. Explore the links to learn more:

We recently got back from a trip to Florida. We traveled to my graduation/commencement ceremony at the Robert E. Webber Institute for Worship Studies in Orange Park, FL (www.IWS.edu). We also managed to do 5 days at Disney World for family vacation, but that’s another story.

I started the Doctor of Worship Studies program in 2007, after a year off from completing my MA in Worship. Interestingly, I began my studies the first session after the passing of Bob Webber, the founder of the school and worship guru. It was a heavy atmosphere, but profoundly formative for me regardless. I got turned on to Webber’s writings in the late 90s in Worship Leader magazine. His monthly column always drew my attention as I began to wade into the waters of leading worship. There was a depth to his writing on worship that attracted me and made me want more. Before finishing seminary, I knew I wanted to continue my studies at IWS.

Here are the big factors that impressed me about IWS and made it one of the best experiences of my life:

I started a new learning group at church this last Sunday. I called it “Worship Through the Bible.” It is a combination of biblical survey and worship study. I want to dig into the bible and discuss how it informs and shapes our worship, both personally and corporately as the church.

I opened the first class by writing “WORSHIP” on the board and inviting everyone to say what comes to mind when they hear the word. Here was the result of that discussion: 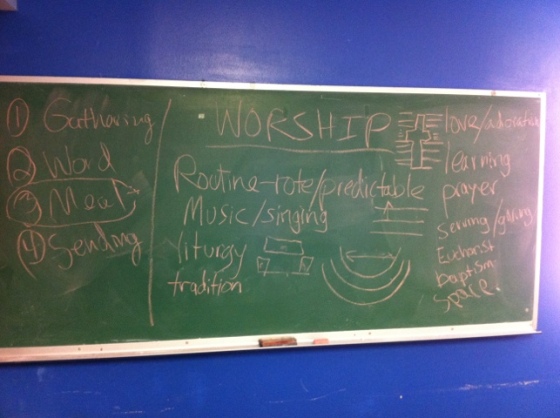 It was great dialogue and you can see some of the direction it went. I took several diversions into instructing on ideas raised (such as the fourfold model and liturgical space). I might try to record next weeks class and post it as a podcast for anyone interested.