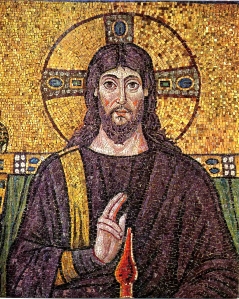 15 He is the image of the invisible God, the firstborn of all creation; 16 for in him all things in heaven and on earth were created, things visible and invisible, whether thrones or dominions or rulers or powers—all things have been created through him and for him. 17 He himself is before all things, and in him all things hold together. 18 He is the head of the body, the church; he is the beginning, the firstborn from the dead, so that he might come to have first place in everything. 19 For in him all the fullness of God was pleased to dwell, 20 and through him God was pleased to reconcile to himself all things, whether on earth or in heaven, by making peace through the blood of his cross.

This hymn to Christ paints a vivid portrait of the divine nature of Jesus. The first half of the hymn (vs. 15-17) recounts Christ’s role in creation. Jesus is with God the Father before creation began. Although he is the firstborn of all creation, Jesus is more than a mere creature. Jesus’ activity in the creation of the world is in equal part with the Father’s activity. All other creatures come into existence through Jesus. Jesus is the divine substance holding all creation in union, keeping the cosmos from tipping out of balance toward destruction.

The second half of the hymn (vs. 18-20) describes Christ’s role in redemption. Jesus is the head of the church. He is not only the firstborn of all creation, but in the resurrection Jesus becomes the firstborn of the dead. The fullness of who God is dwells in Jesus. The last phrase echoes the words of 2 Corinthians 5:19, “that is, in Christ God was reconciling the world to himself, not counting their trespasses against them….”

The origins of this hymn are unclear. One commentator suggests that the hymn original was broken up into different strophes, perhaps something like this:

Strophe I
who is the image of the invisible God
the firstborn of all creation,
for in him were created all things
in heaven and on earth
things visible and invisible
[whether thrones or dominions or rulers or powers]—addition (i)

Strophe III
who is the beginning
the firstborn from the dead
[so that he himself might have preeminence in all things]—addition (iii)
for in him all the fullness was pleased to dwell
and through him to reconcile all things for him,
making peace through him
[through the blood of his cross]—addition (iv) after “making peace”
whether things on earth or things in heaven[1]

This possible configuration of the hymn makes the case that there were additions made to the original material. These additions elaborated ideas that the author of the letter wanted to emphasize and gave it the Christological identity that it has.

For further study check out:

My #ordination and installation as pastor at New Life Lutheran Church in Pearland.
#TLGCS22 #shrimp #shrimpboil #galveston #galvestontexas #galvestonisland #shrimpboil🍤 #🍤 #🍤🍤 #🍤🍤🍤 #🍤🍤🍤🍤
A #sermonquote for this Sunday #3EasterC when Peter comes face to face with the One he denied knowing.
A #sermon for #2EasterC - April 24, 2022. John 20:19-31 #DoubtingThomas
42nd birthday chronicles…